Last weekend Ben attended Oggcamp – a free culture unconference in Liverpool, where he met Raspberry Pi artist in residence Rachel Rayns. Despite spending most of the weekend rendered mute from the tail-end of a cold, he had a great time meeting people and catching up with friends from the Linux and open source tech community, as well as manning a Raspberry Pi demo room with “robot man” Jason Barnett. While Jason showed off what can be done with Pi-powered robots, Ben demonstrated Dave Jones‘s picamera Python module.

Meanwhile, on Saturday, Amy Mather from Manchester gave a Raspberry Pi presentation with Clive from the Foundation at the Wired UK conference in London – before heading back up North to join Ben and the others at Oggcamp on Sunday!

Last night Ben arrived in London for MozFest – a tech gathering at Mozilla’s offices, where he’ll be running a Raspberry Pi workshop with Sam Carlisle, who he met in Berlin. The event’s sold out – but if you’re attending, do drop by to say hello!

We’re seeing a number of halloween related Pi projects as we approach the end of the month – such as Ryan’s Pi pumpkin, this one, and another here from American reader Cody Erekson.

We also spotted a deal on Raspberry Pi ebooks from O’Reilly – 50% off until the end of October. There are some great titles available – check them out! 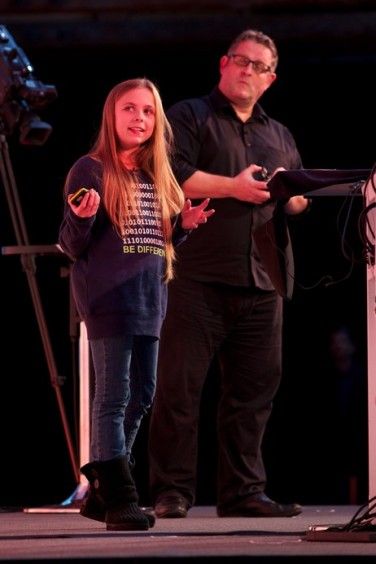 Pimoroni are a company of Makers and Educators.

They make the Pibow case, the PiGlow and PiHUB in their workshop in Sheffield, UK.

At weekends they strap motors onto their laser cutters and race them around the workshop.