Welcome to Issue #42 – the answer to life, the universe and everything!

Ben has worked tirelessly to launch the new Raspberry Pi website, which was preceded by an April Fools’ prank where the site stylesheet was replaced by a retro green-on-black monospace appearance to give a Lynx-style visual to it. This was mostly very well received, where people generally understood it to be a joke and appreciated the novelty (some rather too much, claiming they preferred it to the real site), although a minority took it for real and aired their opinion that it was a disastrous move. The post turned out to be the #10 most commented in the site’s history.

The comment thread on the April Fools’ post was extremely amusing (Ben enjoyed replying to the naysayers). For example, a rather angry Sébastien:

THIS is SCANDALOUS….
Where is the beautiful preceding site ?
I’m considering this new design like an outrageous result made only to annoy us….
Let me tell you, little RaspberryPi webmaster, I Don’t like your new design… it’s like a Green Shrekious monstruosity…

The following day the real new website was launched, which unveiled the hard work the Education team has done: a new resource section (all materials available for free with a Creative Commons licence); community links; documentation and lots more. It’s the start of something big – there’s plenty of work to be done but it’s out there now.

Meanwhile, Pi Weekly made a fake announcement about being acquired by Yahoo! – where we took the Facebook / Oculus Rift announcement and exchanged mentions of “virtual reality” with “email newsletter” and so on.

In other news, the Foundation launched a million pound education fund and announced the winner of the Quake III Bounty – quite a week! 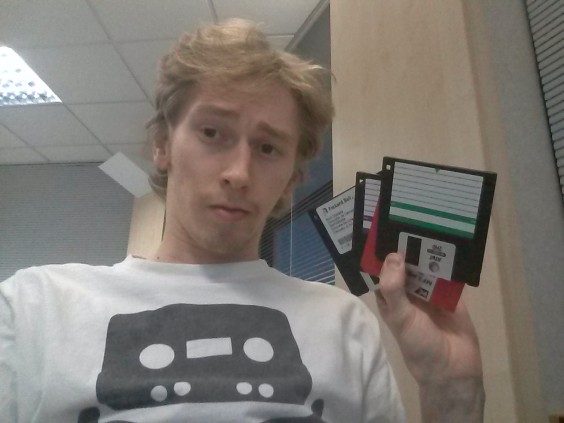 It’s 8pm on 1st April, Ben is mere hours away from launching the new Raspberry Pi website after having dealt with hundreds of comments related to the April Fools’ joke, and having had only a few hours of sleep that week. A comment appears where website user Clifford (who does not see the site design is a prank) expresses his concern for children using the site. Children who have never used a floppy disk.

Ben responds with this picture sharing his concern.

Connect Male or Female wires to any port with RasPiO Breakout, (and detach projects from your Pi without wrecking your wiring)
http://rasp.io/breakout/